AMD is a completely different disease than it was 20 years ago.

Before the advent of anti-VEGF injections, AMD was a devastating disease because people would inexorably lose their vision in their senior years. Patients could no longer read, no longer recognize faces, and retina specialists had few effective treatments. Genetics played a strong role – if parents had the disease, there was a good chance the patient would develop it too. For a long time, we felt helpless in halting progression towards serious vision loss. Then came anti-VEGF agents, and we suddenly had a treatment to halt and even reverse the vision loss associated with AMD.

This quick summary of AMD gives you a framework to start learning about this huge disease.

The biggest risk factor for age-related macular degeneration is age – it’s in the name. Smoking is the biggest modifiable risk factor for disease. Some single gene risk factors have been identified, including ARMS2 and CFH.  About 1.6% of people over 50 and 14% of white women over 80 have the disease.

The pathophysiology is complex and difficult to study. The disease may be caused by oxidative, ischemic, lipidic, or other insults to the choroid, choriocapillaris or RPE, which results in RPE dysfunction and accumulation of extracellular lipofuscin-containing debris called drusen. AMD is generally classified as “dry” or “wet”, depending on the absence of presence of choroidal neovascularization.

The AREDS study was a landmark study which helped classify AMD into various stages.

The AREDS study also showed the benefit of the AREDS formulation of vitamins and minerals to decrease progression to advanced AMD if the patient already had at least intermediate AMD. These vitamins are sold at CVS, Target and other drugstores under brand names such as Ocuvite or PreserVision. The AREDS2 study further refined the recommended formula – see the landmark trials section below for more information. 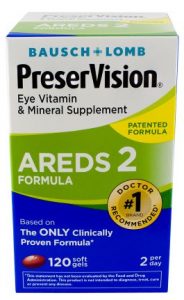 Here are some more examples of drusen and pigmentary changes: 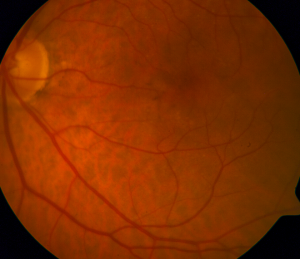 Geographic atrophy consists of well circumscribed areas of RPE atrophy which may be small focal areas distributed in the macula or a single central/paracentral lesion. They classically start paracentrally surrounding the fovea in a horseshoe configuration and eventually involve the fovea, leading to severe vision loss.

Here are some examples of geographic atrophy:

Conversion to wet AMD happens quickly with symptoms of blurry vision, a central or paracentral scotoma, and metamorphopsia. The term “wet” comes from fluid accumulation in the retina due to choroidal neovascularization which cause distortion of the retinal contour and disruption of the normal function of the retina. The most common findings are intraretinal or subretinal fluid, pigment epithelial detachments (PEDs), subretinal hemorrhage, choroidal neovascular membrane, or an end-stage disciform scar.

Choroidal neovascularization (CNV) in wet AMD can be classified into Type I, II, or III.

Now that you know the features of dry and wet AMD, we can discuss how modern imaging can help us diagnose these entities, classify disease, and monitor treatment response.

Color fundus photographs have been the traditional way to document the findings of dry AMD.

In dry AMD, Spectral-domain OCT (SD-OCT) can be being used to monitor, count and quantify drusen and geographic atrophy which can be followed through time. SD-OCT has the advantage of being faster and has higher resolution than the older time-domain OCT (TD-OCT) systems.

Fundus autofluorescence can be used to track the progression of geographic atrophy. With wet AMD, OCT can be used to guide treatment decisions with anti-VEGF agents, as the presence of retinal edema, intraretinal fluid and subretinal fluid can easily be detected.

FA is used to rule in or rule out equivocal cases of conversion to wet AMD, confirm the OCT findings of wet AMD, or differentiate between other neovascular diseases in the differential. 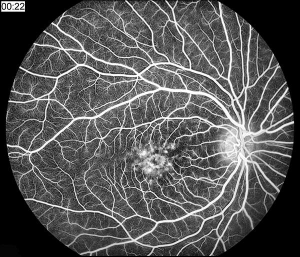 End stage wet AMD leads to the formation of subretinal fibrosis and atrophy of the outer retina. 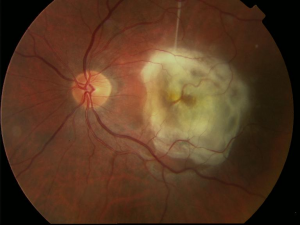 The original AREDS formulation was:

However, beta-carotene was associated with an increased list of lung cancers in smokers. The AREDS2 study showed that substituting lutein and zeathanxine for beta-carotene maintained the same benefit.

The AREDS2 formulation is:

Anti-VEGF agents inhibit the signaling molecule (VEGF) that usually stimulates neovascularization and thus slow down the progression of wet AMD. The oldest intravitreal anti-VEGF agent pegaptanib (Macugen) is not commonly used anymore due to much lower efficacy. The FDA-approved anti-VEGF agents for exudative AMD are ranibizumab (Lucentis) and aflibercept (Eylea). Many new agents are under investigation. Off-label use of bevacizumab (Avastin) is common due to lower cost. These injections are frequently given in a q1 month, q2 month, as needed, a treat-and-extend regimen.

When a patient transitions from dry to wet AMD, we often start with a series of 3 injections and then evaluate with OCT. The goal is to find the optimal regimen for patients to stay dry. Every retina specialist has his/her preferred regimen, but they generally follow a variation of the following:

Photodynamic therapy (PDT) was used before the advent of anti-VEGF agents to treat predominantly classic CNV. It involved intravenous injection of verteporfin (Visudyne), a photoreactive agent, and ocular exposure to blue wavelength light. It slowed the progression of CNV. We don’t commonly use this in the anti-VEGF era.

Thermal laser was used for extrafoveal CNV but suffered from high recurrence rates.

We’ll discuss a few landmark trials here. Just as you cannot discuss cardiology without discussing the AFFIRM trial (remember rate vs rhythm?), many of our practice patterns in retina are evidence based.

High dose vitamin and zinc supplementation decreases the risk of progression to advanced AMD by 25%.

The 1st Phase III Lucentis (ranibizumab) trial in eyes with minimally classic/occult CNV. 95% of eyes maintained vision. 40% of eyes had improved vision. Remember, PDT (photodynamic therapy) was the standard of care for predominantly classic lesions, which is why they only studied minimally classic/occult CNV. In comparison to Lucentis, 67% of eyes maintained vision when they were treated with PDT in the TAP study.