There are a few different types of ultrasound that can be performed on the eye. The “A scan” is performed by placing an ultrasound transducer directly on the cornea or using an immersion shell after some numbing drops are applied. It performs a single line scan which can be used to measure axial length or numerically compare the reflectivity of different structures. The “B scan” is usually performed by placing the transducer on the patient’s closed eyelid. It creates the typical 2D image that you associate with ultrasound. Ultrasound biomicroscopy (UBM) is performed with a much higher frequency than the A and B scans and is primarily used to evaluate the anterior chamber angle and ciliary body.

Here is a summary of what the different ultrasound scans are used for:

Basics of B scan

We’re going to focus on B scan in this article. Here are the key concepts you need to know to understand B scan ultrasound for the eye.

First, for the purposes of ophthalmic ultrasound, the posterior of the eye is centered on the optic nerve, not the fovea.

There are 3 scan orientations.

Of the 3 orientations, transverse is used the most because it allows you to pan the probe and integrate that quadrant of the retinal periphery into a 3D mental image. This is something that you will understand and get much better at with a little practice in clinic.

Performing a dynamic scan just means having the patient move their eye back and forth to evaluate how the structures are moving. This is most important in differentiating vitreous detachments from more emergent retinal detachments. The posterior hyaloid membrane (which separates the vitreous from the retina) moves rapidly and tumbles loosely in the eye, like a “washing machine”. The retina undulates more slowly and is more echogenic than the hyaloid.

Retinal detachments have a characteristic undulating movement of the retina with dynamic scans. The retina moves at a slower speed than the posterior hyaloid and its reflectivity is higher. You can use ultrasound using the axial, transverse and longitudinal views to delineate where the retina has detached. 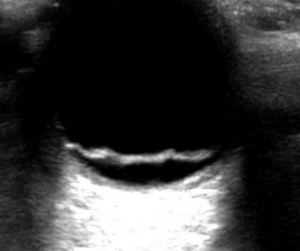 Vitreous hemorrhages are seen commonly in the setting of acute vision loss in one eye. They can happen in diabetic retinopathy and almost every other retinal neovascular disease. 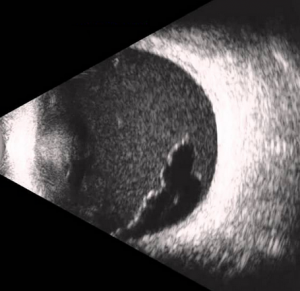 Choroidal nevi can be differentiated from choroidal melanoma in that they have a uniform, high internal reflectivity. 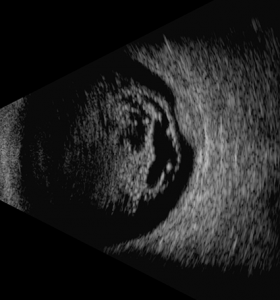 Choroidal melanomas have a low to medium internal reflectivity due to the fact that they are more vascular. 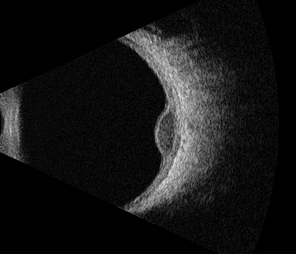 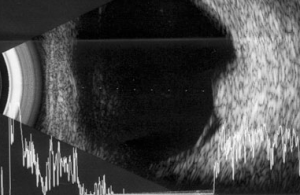