Diabetic retinopathy is a huge disease, and is one of the two bread and butter diseases in retina, the other being macular degeneration. This is a long framework, but we promise you it’s all high-yield. Here’s the core information you need to know to get you started towards optimally treating your diabetic patients!

Diabetic micro-angiopathy affects the capillaries in the eye just like it does elsewhere in the body leading to neuropathy and nephropathy. At first, the ischemia causes non-proliferative retinopathy. When the peripheral retina (where it’s more vulnerable) gets too ischemic, it releases VEGF and other angiogenic factors leading to neovascularization and proliferative diabetic retinopathy. 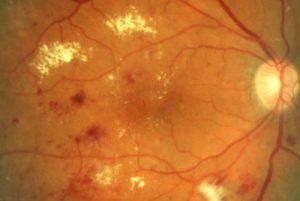 It’s hard to find good photos online of these important diabetic retinopathy features. Here, we have assembled photos from the ETDRS study (Early Treatment of Diabetic Retinopathy Study), one of the landmark trials in diabetes. We’ve sized the photos to approximately match what you’d see using the indirect, and circled the relevant findings on each image so you know what you are looking for.

Evidence does not support intraocular treatment for all but the most severe NPDR. Thus, we generally try to get patients to lower their A1C and blood pressure per UKPDS guidelines and see them back in clinic based on how severe their disease is. Follow up times for NPDR are roughly as follows:

Bilateral severe NPDR and severe NPDR are felt to be at risk for quick progression, and patients with poor follow up should be considered for panretinal photocoagulation (PRP).

While diabetic retinopathy generally progresses from non-proliferative to proliferative, macular edema can manifest on any point along this spectrum. This is a confusing topic, since people refer to it as CSME, DME, or CME. We will demystify these terms below:

CME (cystoid macular edema) is the broadest term, and refers to any manifestation of macular edema. This can describe etiologies of intraretinal swelling including diabetes, post-surgical macular edema, vein occlusions, and uveitis.

CSME (clinically significant macular edema) is a further subset of DME, and is a set of strict criteria used in the ETDRS trial pre-OCT as the endpoint for treatment with focal macular laser, this is a diagnosis made via funduscopic exam:

To summarize: from broadest to most specific: CME > DME > CSME.

In the OCT era, we don’t really use strict ETDRS criteria (for CSME) anymore. This is because OCT can better visualize the retina and show us whether there is intraretinal fluid or not, rather than having to rely on surrogate markers such as hard exudates. Nowadays, we look at diabetic macular edema involving the center of the macula as a criteria warranting treatment.

PDR happens after the diabetic angiopathy causes ischemia that is severe and longstanding enough to lead to neovascularization. PDR is really bad news for the eye! It is believed that this process starts with endothelial cell disruption and osmotic fluctuations, eventually leading to capillary dropout and ischemia. Ultimately, these lead to impaired blood flow to the retina, production of VEGF, and the formation of new blood vessels.

PDR can additionally be classified as high-risk PDR, based on the DRS (Diabetic Retinopathy Study) study. Patients with high-risk PDR have a higher risk for severe vision loss.

High-risk PDR criteria (any of these three):

High-risk PDR patients should be signed up for PRP (panretinal photocoagulation) . Patients with early PDR (or even patients with severe NPDR) who you think are high risk due to their poor diabetic control or poor follow up should be considered for early PRP. PDR can also be treated with anti-VEGF injections.

Vitreous hemorrhage happens due to bleeding from fine neovascular blood vessels. Anti-VEGF agents can be used to decrease the bleeding which causes regression of the neovascular membranes. If the blood does not clear after a period of time (generally one to a few months), patients should undergo pars plana vitrectomy for non-clearing vitreous hemorrhage.

Fibrosis over the retinal happens most commonly over the optic nerve and the vascular arcades. These contracting fibrous membranes will apply traction to the retinal, affecting central vision, detaching the macula, or causing a retinal break leading to a rhegmatogenous retinal detachment. Visually significant or vision threatening TRDs should receive pars plana vitrectomy with membrane peeling.

The DRS study was started in 1972 to evaluate PRP, and to this day PRP stands as the gold standard for treating proliferative diabetic retinopathy. The goal of PRP is to decrease the overall amount of VEGF produced in the eye by sacrificing peripheral, less important retina to save the macula. Sounds barbaric, and studies are ongoing to determine if regular injections are as effective as PRP.

Almost all patients who have severe disease eventually end up getting this. Laser can be done in one sitting or multiple. Different laser devices of different wavelengths can be used including single shot laser, pattern scan laser, or navigated retinal laser photocoagulation.

This is not nearly as common as anti-VEGF. Intravitreal injection of triamcinolone acetonide (Kenalog) or Triescence (preservative free triamcinolone acetonide) has also been used to treat DME. The most common side effects are cataracts and high IOP. For this reason, this is often tried after the patient does not respond to anti-VEGF agents. The intravitreal dexamethasone eluting implant Ozurdex, is also FDA approved for diabetic macular edema. Their IOP should be monitored because susceptible patients will get an IOP spike which peaks between 2-6 weeks.

Focal laser still has a place in the modern treatment of DME. Laser can be used to dry up leaky microaneurysms causing retinal edema. Often these leaky aneurysms can be identified by a “circinate” ring of exudates around them, or the laser can be guided by microaneurysms seen on fluorescein angiogram. Grid laser photocoagulation involves uniformly spaced laser burns to the macula for diffuse retinal edema.

The vitreous jelly helps retain intraocular VEGF and serves as a scaffold for the proliferation of blood vessels and fibrosis. Removing the vitreous, applying generous endolaser photocoagulation, and peeling any component of traction if TRDs have occurred all help to stabilize the diabetic eye. Eyes with diabetic macular edema and vitreomacular traction syndrome can also benefit from vitrectomy.